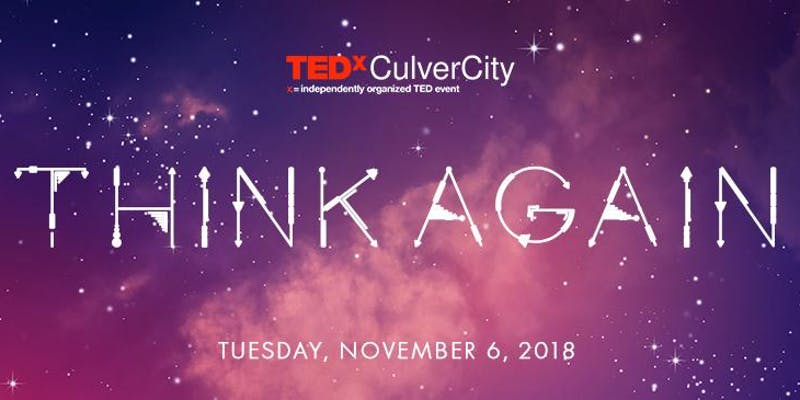 We will have fascinating speakers that will share their viewpoints on the theme of “Think Again.” The speakers will talk about new ways of thinking, new perspectives, and new technologies that are needed to redefine our relationship with society to create a better world. The talks will challenge us to ask the question, how can we break away from conventional norms and re-examine the world around us.

David is a former automotive engineer who recently launched ThruGreen, a smart infrastructure startup with a mission to give everyone more green lights. Prior to entering the startup world he worked on a wide range of regulatory and technology issues for the trucking industry, DARPA, and the American Automobile Association (AAA) for more than a decade. Following that he served as a technical advisor to an intellectual property law firm, focused on patents mainly related to automotive, drone, and electromechanical applications. He holds a Bachelors degree in mechanical engineering from Virginia Tech. When not working he can often be found racing go-karts, biking, practicing yoga, or indulging his love of sports cars.

Olivia Richman is a third-year medical student committed to making a remarkable contribution for teens worldwide through entertainment - education. After seeing the abundant amount of questions her younger cousins had about their reproductive health, she realized that if they don’t have the answers to these questions, other teens in the US probably don’t either. That’s when she decided to create a YouTube channel, GlamourPuss, M.D. She is Cuban-American and plans to reproduce her videos in Spanish to connect with teens in the Caribbean, Spain and Central and South America.

Sara’s goal is to help mitigate climate change and improve human health through transforming the built environment. She is Senior Vice President, Sustainability at Kilroy Realty Corporation. She took Kilroy from having no sustainability program to being named the #1 publicly traded real estate company in the world on sustainability. Now Kilroy is going to achieve carbon neutral operations by the end of 2020, something no American real estate firm has done.

She holds a BS from Stanford and an MBA from Columbia Business School. She has been doing improvisational theater for the last 15 years, and her two amazing daughters spur her to tackle bigger and bigger challenges every day.

Lisa Daftari is an award-winning investigative journalist and political analyst, frequently appearing on news platforms including Fox News, CNN, CBS, Voice of America and SiriusXM, specializing in foreign affairs and national security. She is the founding editor of The Foreign Desk, a newswire service covering global stories impacting U.S. foreign policy. Lisa has worked for think tanks in Washington, where she has written exclusive reports for the Pentagon, and is regularly called upon to give briefings and expert testimony to government and private entities. She holds a master’s degree in broadcast journalism from the University of Southern California Annenberg School of Journalism with an undergraduate in Middle East studies, Spanish and vocal performance from Rutgers University. Lisa speaks fluent Farsi, Spanish, Hebrew and English and is an avid opera singer and pianist.

First generation American of Venezuelan descent, Isabel Beyoso shares her multicultural musical sensibilities, unique versatility, and emotionally rich songwriting style. Her love of music began in early childhood and has continued through her adolescent development and on, as she listened to beautiful lyrical melodies, and a wide range of styles; from classical, R&B, jazz, soul, latin music, and reggae, to name a few. Her ever evolving musical interests have also lead her to experience and embrace the soulful, rhythmic revelations of the heart and genuine expressions in spirit of outstanding artists. She loves to create music when inspiration sparks, so it can vary in style and feel. http://www.isabelbeyoso.com/

Thank you to our sponsors:

Feast From the East

Go Metro to this event. Plan your trip.

Help make InnovateLA 2018 the biggest year yet by signing up to stay updated here: